Posted by Alternative Irish Music Review at 7:35 PM No comments:

Kowalski are back with the second of four 'For The Love Of Letting Go' live session performances. This time round the Bangor four piece perform Longer The Night Lasts  which displays a gentler reflective side to the group who normally deliver their heartache laden lyrics upon a bed of bouncy pop tones. The video is once again directed by longtime collaborator Babysweet.

Posted by Alternative Irish Music Review at 9:26 PM No comments:

Video: VerseChorusVerse - Our Truth Could Be Their Lie

Our Truth Could Be Their Lie the latest song from VerseChorusVerse has a surf tinged rockabilly feel which comes across wonderfully in this live performance video.

Posted by Alternative Irish Music Review at 9:12 PM No comments:

The Radioactive Grandma had us all worried when they kept saying "Get your wrists out for the lads" a while back but, it all makes sense now thanks to the release of their hand-puppet themed video Don't Look Down. 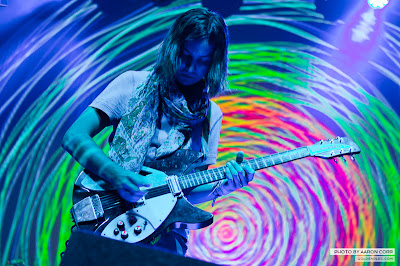 A cyclone of pastel crayon colours created the perfect vortex of visuals to accompany the masterclass in psychedelic crescendos Perth five-piece Tame Impala delivered with effortless vigour as Kevin Parker brought his expansive brand of Lonerism to Dublin’s Olympia Theatre last night. Julien Barbagallo’s joyful happy-go-lucky approach to the drums provided the focal point on stage but his bouncy head and seemingly effortless movement couldn’t betray the level of musicianship on stage as Tame Impala filled every nook and cranny in The Olympia with swaths of intricate floaty motifs and coda after coda.

Why Won’t You Make Up Your Mind? set the psychedelic pace with the rhythm section of Barbagallo and Cam Avery (bass) laying down a tight groove enabling Parker and Co. to build an expansive intertwining soundscape. But it was by no means ninety minutes of floaty rock ‘n’ roll. Parker’s guitar was about as polite as a Panzer tank at times laying waste to everything in its path through the frequent improvised jam sections. Solitude Is Bliss was an early highlight, Parker’s soft vocals resonating perfectly against the kind of groove many a band have been lost in the wilderness in search of to resurrect their careers. Keep On Lying continued the feel-good atmosphere with Parker once again setting his guitar to Panzer. The crowd duly responded by singing back the simple but catchy melody break.

The excellent Music To Walk Home By kept the crowd singing along with “it’s only when I think of you” repeatedly filling the air. The outro groove led into a reprise of Solitude Is Bliss, a technique which heightened the psychedelic experience with more a than a few “didn’t they already play this?” expressions visible throughout the crowd.  Hit single Elephant delivered the kind of Jagger swagger that Maroon 5′s accountants can only dream of. Even grittier live than on record with bass and drums pounding home the hypnotic groove, but it’s Dominic Simper’s synth work which gives Elephant an added dimension.

Be Above It and Feels Like We Only Go Backwards exemplified the influence of the Beatles on Tame Impala, Be Above It tapping into the experimental leanings of Lennon while the superb Feels Like We Only Go Backwards  provided the kind of blissed out moments of unity the assembled crowd had come to experience. Kevin Parker’s dreamy vocal combined perfectly with a bass-line reminiscent of Paul McCartney’s heyday.

An extended Apocalypse Dreams closed the first section of the show by attempting to send a sonic message into outer space before the band returns for an encore with It’s Not Meant To Be. Things are momentarily delayed as Parker dons an Irish flag, and a brief rendition of Olé, Olé, Olé breaks out before an extended version of Nothing That Has Happened So Far Has Been Anything That We Could Control descends into a psychedelic mush of future memories.

Liza Flume is quickly becoming Ireland's cult songstress of choice. 2013 has seen her become a prominent figure in the festival circuit and justifiably so, thanks to haunting, heartfelt songs such as What We Called Love. Latest video Swords continues to unfold the darker side of Flume's experience and her honesty is sure to win her even more fans.

Posted by Alternative Irish Music Review at 12:46 PM No comments: 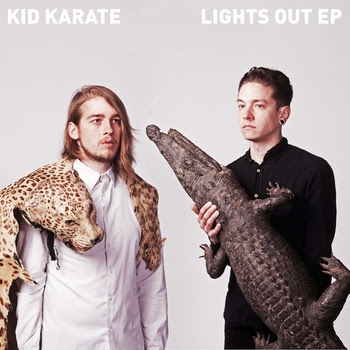 Z-list celebrity-creating pseudo-reality TV show ‘Fade St.’ has a lot of things to apologise for but Kid Karate certainly isn’t one of them. In fact the band is an unforeseen by-product of the show and is its only saving grace. Expectations for the Dublin duo’s début four-track EP ‘Lights Out’ have been heightened thanks to a series of hilarious and breathtaking high-octane live shows which have marked them apart from the hordes of bands in Dublin.

Kid Karate unleash their guitar/drum/vox volcano straight away with single Two Times which is about as subtle as a YouTube street brawl.  Kevin Breen vocalist/guitarist teeters on the edge as he lays down a quagmire of distortion and angsty vocals as drummer Steven Gannon tries to play ringmaster whilst simultaneously egging his companion on. American influences abide but Two Times’ chorus grabs you in such a way that this almost becomes irrelevant.

Heart continues the doctrine that one Big Muff isn’t enough with riffs that are impossibly rich and thick like triple chocolate cake. The inclusion of placid piano breaks and electro loops indicate influences beyond QOTSA such as LCD Soundsystem. When Breen bellows “If I had a heart I would love you” classic male commitment issues shine through making the track universally accessible.  An ’80s vibe permeates the octave key, bass and delayed guitar stab out the intro to This City and the lyrics 180 on the male commitment issues through the verses: “I think we should start a family,” while the choruses lament the vacuous lifestyle of city living: “in this city you’re dead.”
‘Lights Out’ is the perfect precursor for Kid Karate’s début album ‘Night Terrors’ due to drop later this year. No doubt comparisons with The White Stripes, Giveamanakick and indeed Cast Of Cheers’ side project Charmers will be forthcoming and somewhat justified but Kid Karate can more than hold their own at an advanced level of combat.
Posted by Alternative Irish Music Review at 1:26 PM No comments: