'Oh Yeah' the latest album from Ireland's fastest growing record label Richter Collective sees Belfast trio Not Squares firmly establish themselves as one of, if not the best dance band in the country today. 'Oh Yeah' is a throbbing & intricate stimulation of the senses ambitious, fulfilling and essential as cocaine in the Ryan diet.

A chopper of white noise demands attention as Release The Bees unfurls a raft of old school Out Of Control style Chemical Brothers beats. Following a 'heavenly father' style voiceover the live drums take over and an "oh oh oh" vocal hook chips the lock of our primal senses. A butterfly keyboard riff and a Goosey bass line set up DE NA NA perfectly. Quirky vocals and high grade syncopated funky riffs are jam packed into this 3 minute wonder. While In Front is a strangely pleasing mix of Muse, 8bit squawk box and homoerotic Flawless vamping.

No doubt simple arty types will compare the staccato guitar riffs of Smith & Carlos to (the) Foals and other putrid modernisms. However, it undoubtedly pays homage to originators like Talking Heads. This bouncy track features an excellent catchy 8 bit keyboard line. Quirky anthem Asylum, one of the singles of the year intros with a Cochise style drumbeat. The guitar is rockabilly with QOTSA grit and the main vocal "I wanna live in an Asylum" burrows into your brain and screams "joy." If all this wasn't enough the best is yet to come. It's group therapy time folks, open up and say Aaaaghh!!! Asylum's highlight comes as a wall of voices let out a primal roar of melody, backed by a flock of guitars in unison.

Feel Good Hit of the Summer meets Another Brick in the Wall word play on Don't Do Nothing; its at its best when the bass is doubled. A Stonehenge sub bass intro leads us nicely into Yeah! Not squares have delved into gothic dance on this track, which in large part is a drum expo. Hurray for the distorted bass swagger of stand out track Ojos Para Volar part Gorillaz, part Rapture, 100% indie diso dance floor filler. It's almost enough to make you go out and by decks yourself. On Bi Kan Na sibling to earlier track De Na Na, Not Squares return to up tempo Belgian dance gods Goose influenced throaty key bass.

'Oh Yeah' concludes with the romping 53 led by a snappy snare, dirty funk bass and grinding guitar. 53 picks up pace adding keyboards and extra bass, melding Yeah Yeah Yeahs with The Go Team in the process. A reprise of the excellent bass melody break draws the album to a close.

'Oh yeah' will probably miss the seasonal best of lists due to its end of year release. However, it deserves to place high-up on these lists, such is the level of content within. We expect 2011 to be a breakthrough year for Not Squares.
Posted by Alternative Irish Music Review at 1:22 PM No comments: 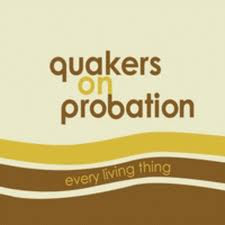 Seattle's Quakers on Probation consist of father and son songwriting team Daniel A. Craig and Daniel F. Craig and studio owner and musician Graig Markel. Benefiting from this unusual creative dynamic, their debut album 'Every Living Thing' is an eclectic collection of Lo-Fi alt country rock. This dynamic allows them to create a believable mix of wisdom and youthful idealism.

Imagine Simon and Garfunkel in their pomp vamping out Like a Rolling Stone and your in the same head-space as opening track Pay it Froward. The track features the organ swirls of legendary Grammy award winning Wrecking Crew member Larry Knechtel (Bread,The Doors, Simon and Garfunkel)

The mid tempo shuffle brushed drums and percussion of Your Favourite Song make for the perfect road trip movie soundtrack. A more traditional country sound of slide and acoustic guitars mixed with some excellent lead guitar make this an early highlight.

Happy-sad, love on the run ballad Sun Country Inn is melody laden with beautiful orchestral style interplay between banjo, piano, slide guitar and electric guitar. While I Know a Woman is a strange concoction of 'White Album' era Beatles and country superstar Neil Diamond. Stabbing pianos are joined by trumpets for the simple but effectic chorus of "I know a woman, I know a woman." This highly radio friendly track has hit single stamped all over it in capital letters.

A track straight from the WJAZ play list, title track Every Living Thing dances between the raindrops like Donald Fagan and Burt Bacharach and the obligatory piano solo does not disappoint. In Yard Sale, Craig examines the success and failures of his life through the contents of a yard sale. But can he really let go of his past and part with his "Elvis tapestry" The concept of this song is more pleasing than the musical content, a slight blip on the road.

Things go back up the gears with Marysville a breezy Eagles meets The Travelling Wilburys style number with a dark twist. The lead guitar is the perfect companion for "The same hotel room in forty different towns" and "drinking up the darkness."

Hollywood Walk of Fame See's 'Every Living Thing' take an unexpected but welcome Lo-Fi detour through Synthtown. The electronic instruments move to the fore and a more modern sound permeates the album from here on in. Keyboard stabs and a repetitive drum machine loop form the heartbeat of Hollywood Walk of Fame; a daydream fantasy about making it big in moving pictures.

The influence of Simon and Garfunkel is replaced by Linkin Park and French pop geniuses Air on G.I. Joes. The lyrics also undergo a modern metamorphosis "There's goes my credit and my girl" and "You can take my things, dont take my G.I. Joes" become repeated intersections where earlier songs would have entered verse 3 or four. Perhaps this less wordy modern approach has yielded the most dividend, for G.I. Joes is the very unexpected highlight of the album.

Lament for the Aging Rocker is a firmly tongue in cheek lambast of Axl Rose and his Rock N' Roll peers. The track bares more than a passing resemblance to California folk-rock revivalists Blind Melon's 1993 hit No Rain most famous for its video featuring "Bee Girl" Heather DeLoach. The vocal resemblance between Craig and the now deceased Shannon Hoon is uncanny on this fun hootenanny.

'Every Living Thing' wont disappoint fans of folk-rock country with the emphasis on choruses and melody, rather than 12 verse soliloquy. The musicianship is equisite throughout, especially on the live drums and lead guitar which really make the album what it is. Craig's voice is authentic from first to last, especially when his native Seattle timbre shines through.
Posted by Alternative Irish Music Review at 6:02 PM 2 comments: