Jape delivers yet another fine video with his latest offering "The Oldest Mind" from his top class new album "Ocean Of Frequency".


Jape // The Oldest Mind from Feel Good Lost on Vimeo.

Posted by Alternative Irish Music Review at 6:52 PM No comments:

We Cut Corners latest video is just as noteworthy as its predecessor. 100% less controversial it may be, with no breasts to found. But It is a beautiful artistic endeavour, painstakingly crafted by hand. "Pirate's Life" is a beautiful video riveting from the first frame to the last. Enjoy.


We Cut Corners "Pirate's Life" from Kijek / Adamski on Vimeo.

Posted by Alternative Irish Music Review at 6:42 PM No comments:

Video: The Ambience Affair - The Fallen

The Ambience Affair play The Workman's Club on Friday 28th of October, as part of their Irish tour in support of their debut album Burials. Support comes from Katie Kim and Jennifer Evans. With tickets priced at only €12, you'll be hard-pushed to find more bang for your buck in Dublin that night.

Below is the video for "The Fallen", the first single to be taken from the album.

Posted by Alternative Irish Music Review at 11:22 PM No comments:

Video: Shibuya Crossings - At Eight in a Spanish Bar

Below is the video for Shibuya Crossings latest single "At Eight in a Spanish Bar", taken from their quality second album "Depend On Your Alter-Ego".
Download the track for free here.
http://www.shibuyacrossings.com/blog/2011/10/06/at-eight-in-a-spanish-bar-video/
Posted by Alternative Irish Music Review at 4:56 PM No comments: 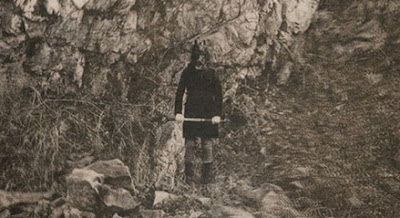 "Burials" is the début album from Irish rhythm and gloom trio The Ambience Affair. The band have previously released two EP's and won best video for "Devil in the Detail" at the inaugural Digital Socket Awards, earlier this year.

Burials is a highly rhythmic and atmospheric collection of songs that reaches into the darkest crevasses of despair with verve.  The influence of Thom Yorke, Arcade Fire and Wild Beasts is apparent. As is an affinity for Robert Smith's darkest and most uncompromising offerings.  Unsurprisingly Burials is not a trip down instant street.  It requires repeated listening for the songs to fully soak into the listener.

A preamble of white noise leads us into opening track "Weeds" which is driven by panned oriental guitar stabs. The opening lyric "I left you in the the dirt. I carved my name in the earth" is a fitting introduction to the album as a whole. As earthy, is an adjective which best describes the album.  Built on a hypnotic rhythm figure which is cleverly layered and embellished upon by the instruments that weave around it "War Weary" (1) is the early stand-out track on the album. The lyrics continue to map the dark primal instincts of humanity with aplomb. You can expect to here this at an indie disco near you soon.

"To Be Led" at 1:23, feels more like an extended intro into single "The Fallen", rather than a fully blown song in its own right. However, this does not take away from its quality. Beautiful sombre piano is joined by funeral procession brass as the single lyric of "I will follow you" leads us into "The Fallen" proper.

The influence of Arcade Fire on The Ambience Affair is never more apparent than it is on this song. "Neighbourhood #3 (Power Out)" in particular seems to be a major reference point for this composition. With up-tempo groovy bass juxtaposed against long sombre violin notes combining in a similar fashion. It also arguably contains the albums most radio friendly refrain "I want to fall for you" and was unsurprisingly chosen as the lead single to be taken from the album.

"Tides" is a serious contender for single status. It is a perfectly weighted combination of everything that makes The Ambience Affair worthwhile. A world weary refrain; smashed against a wall of atmospheric drums, melodic guitars and harmony vocals. With a pulsating groove gluing it all together. "Tearing at the Seems" is comprised of two sections. A stunning post-rock instrumental opening and a Mumford and Sons-esque mini song outro. It is a pity they have not been separated and expanded upon, as both are quality compositions in their own right.

The inclusion of the "War Weary" trilogy was a brave move by The Ambience Affair. It displays their ambitions and their creativity are at levels beyond many of their musical peers. To be truly appreciated as a trilogy, they must be played as a trilogy and not separated by other tracks. The Ambience Affair have elected to present the trilogy in a separated format, which delivers the material as a brace rather than a trilogy. A quick rejig in itunes allowed us to get further inside the songs, which in-turn allowed us to better appreciate them, as presented by the artist.

The intriguingly titled "(...)" closes the album in some style. It is a major departure from the albums other material. A coarsely recorded acoustic guitar is set against porcelain piano notes as Jamie Clarke, delivers a tender lovelorn vocal. Which bizarrely is his finest on the album.

Singer and guitarist Jamie Clarke's voice is powerful, intense and gruff. However, he relies heavily upon certain styles of vocal delivery. Which, whilst enthralling some listeners, will leave others with a "samey" feeling. (We are currently enthralled by Clarke) Percussionist Marc Gallagher, is the real star of Burials. His drumming and percussion is inventive throughout. He is responsible for the majority of the albums atmosphere. Thanks to a mixture of subtle and textured playing combined with bombastic sound-scape splitting beats.

Burials, is by no means an easy listen. But it is an album well worth persevering with. We are certainly glad we did.
Posted by Alternative Irish Music Review at 2:00 PM No comments: