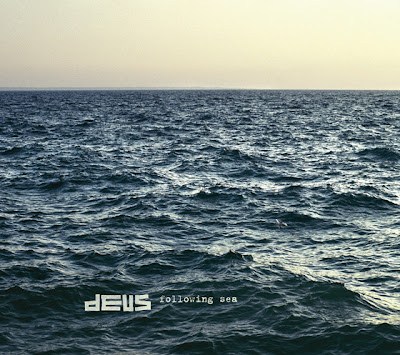 dEUS's latest album 'Following Sea' comes just 8 months after its predecessor 'Keep You Close' it was recorded on the road with the songs mostly being written in a series of furious "nocturnal jams" according to singer Tom Barman. 'Following Sea' also includes several songs from the 'Keep You Close' sessions. As a result the album is a Neapolitan collection of songs inspired by various cities and countries with a lyrical thread of travel and in particular nautical adventure running throughout, which was eventually reflected in the albums title.

Quatre Mains has a seedy strip club funk meets James Bond theme flavour with funky guitar stabs and pulsating bass combining with strings and harpsichord. Amazingly it's dEUS's first song to be sung in French, but with Tom Barman's voice sounding so lush and seedy on this track it's safe to say it won't be the last. From France to Spain on Sirens the follow up track to Ghosts from 'Keep You Close'. Indeed elements of Sirens were originally intended to be included in Ghosts. However Sirens stands up as a song in its own right as opposed to just being an after thought.

Girls Keep Drinking is the first unfulfilling song on the album. Inspired by Antwerp's insipid nightlife it leads us through a disco rant at the financial sector and politicians. It all seems a bit rushed and under-thought probably as a result or dEUS's decision to write and record at an abnormally heightened pace for the band. On second single The Soft Fall Tom Barman's vocal switches between a romantic Steve Wall-esque lilt and a Baz Luhrmann spoken word life lesson. Its the most pleasing of the mid album trio of romantic compositions with a memorable chorus of "this is what the good life is". Unfortunately Crazy About You is frankly paltry and throwaway by comparison.However Nothings despite its title holds some weight, harking back to earlier reflective material in dEUS's cannon.

The Give Up Gene is a successfully returns to the albums earlier seedy feel widening the albums musical geography to Brazil with the inclusion of a throbbing berimbau motif augmented by yet another wonderfully dark bassline. Barman delivers one of the albums best spoken word performances reflecting on the failings of the captain of the Costa Concordia and the corruption of power and lack of standards in the wider world. The most memorable thing about Fire Up The Google Beast Algorithm is its title. The two minute stream of consciousness rant resembles a throwaway track resembling a secret song. It's yet another unfulfilling moment from a band with usually impeccable standards of craftsmanship. Thankfully, One Thing About Waves concludes Following Sea in dEUs's traditional way, with an epic. One Thing About Waves unfurls itself over the course of 6 minutes brimming with cascading guitar stabs and Barman's finest vocal performance of the album.

It leaves you with the feeling that 'Following Sea' could have been an immense album rather than a good but patchy album, had standards been set slightly higher. It's a shame as there are some fantastic songs on the album but, as a whole it doesn't quite deliver. However, 'Following Sea' indicates that there is plenty creative juice left in Tom Barman and Co. and they could easily strike gold next time around.
Posted by Alternative Irish Music Review at 11:17 AM No comments:

Kid Karate are one of Ireland's best kept musical secrets. The Dublin duo consist of singer/guitarist Kevin Breen and drummer Steven Ganno. They have been wowing crowds for several years now with their thunderous drums and guillotine guitar sound, while their on-stage banter and hijinks energise crowds. All of which combines to make them one of the best live bands in Ireland today. Two Times is taken from the bands truly, eagerly awaited, forthcoming debut album.

Posted by Alternative Irish Music Review at 9:53 PM No comments:

Here at AIMR we're not sure how we let the video for Love System by Le Galaxie slip through the cracks this summer. The video features the hilarious introduction of The Dead Presidents to Le Galaxie's world; while Elaine Mae makes a special guest appearance on lead vocals. Le Galaxie have been one of the highlights of the festival season and we expect them to be main stage artists this time next year.

Posted by Alternative Irish Music Review at 12:41 PM No comments:

The new Single from The Villagers is not out until the end of October but the band have elected to release this rather trippy video for The Waves now.

Posted by Alternative Irish Music Review at 12:28 PM No comments: