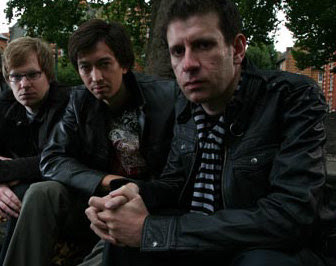 Do you find zebra-crossings inspirational? Would you name your band after one? Probably not, but that's exactly what Northern Irish Singer-Songwriter Declan Harrington did when he christened his band Shibuya Crossings, after the worlds busiest zebra crossing in Tokyo.  It symbolised Harrington's wish to escape the NI. fishbowl and expand his musical horizons. So much so that he pieced together a band featuring members from New Zealand and The Philippines.
Several years later Shibuya Crossings, are based in Islington and have just released their second album "Depend On Your Alter-Ego" or "DOYA" on Typically Magic Records.

The influence of Pavement is apparent as "DOYA" opens with the upbeat single "At Eight in a Spanish Bar". This is a real gem. Criminally overlooked by the Irish music press. The song features catchy chugging alt rock riffs and a sing along outro of "Everybody's watching us all time". The song instantly displays Harrington's vocal abilities as he jumps from speak/sing mode to harmony vox and back again with ease. Its one of the best Irish singles of the year so far.

"Take it Out on Me" continues the upbeat alt Americana feel. This track has a Weezer meets OK Go feel, with fuzzy guitars juxtaposed against high pitched harmony vox. It's slightly camp in places due to the octave bass, but good fun non the less. "You Know it Anyway" is reminiscent of "Proximity Effect" era Nada Surf in places especially on Harrington's vocal delivery in the verses.

"I'll Meet You at the Station" sees the BPM drop considerably for a top-notch country tinged ballad. The emotion is palpable as Harrington repeats "Where did you go".  While "Gamla Stan" is a good punt to become the next single from the album; featuring more uptempo guitar riffs and several intertwining chorus sections, which combine to bring the song to a close.
The influence of brit-pop runs as an under current throughout the album but it comes to the fore on "If it isn't getting better" and "Everyday (secrets of your style)". The former taking its cues from more modern bands such as Kaiser Chiefs.

"DOYA" is a joyful collection of songs. Far more worthy of your time, than many of the over-hyped Irish albums currently taking up column inches, in the national press. Their single "At Eight in a Spanish Bar" is currently available on free download here
Posted by Alternative Irish Music Review at 9:20 PM No comments:

The debut album by Irish underground super group Tieranniesaur!  is an eclectic collection of super fun fusion, of sweet like chocolate disco funk. Indeed it's ice cream for the ears in places.
Tieranniesaur! is a clever pun on lead singer Annie Tierney's name. The band itself contains members of Squarehead, Feed The Bears, and Yeh Deadlies. With the exception of Squarehead however, Tierannisaur!, have left their day-job bands trailing, in their new-wave funk dust.

Opening track "Rockblocker" is a sure fire indie-disco dance floor smash. "Sketch" mixes retro Jackson 5 style guitar phrases with b-girl goodness. The fiery key bass of "I Don't Stop" sees a major jump into more contemporary dance genres. While "Azure island" starts of well with some Gracelandesque bass groves. But fades badly when Bobby gets involved with some less than average 90's rapping

"In The Sargasso" is another highlight, built on yet more exquisite bass lines. The influence of Debbie Harry and Chic can especially be felt on this track and "Pretty Girl String Quartet"

"Here Be Monsters" is the last track of note on the album. Remaining tracks "I Tink Ur Strange" and the forgettable "Remember My Name" lack the clarity and direction of previous tracks.
It's unfortunate that the album stutters to a close in this way. As Tierannisaur!, is surely one of the most inventive Irish albums of the year. However, the album is certainly like Marmite. And just like Abba, you'll either love it or hate it. And you won't quite know why.
The album is availble  on 3 formats. Including retro-red cassette and pre loaded Playbutton. You can also download the album on bandcamp
Posted by Alternative Irish Music Review at 7:14 PM No comments:

If you go down to the woods today, you'll find the video for Kowalski's latest single "Outdoors". The video directed by Babysweet Sessions sees the band deliver a performance in a magical woodland and  pays homage to The White Strips in the process.

Posted by Alternative Irish Music Review at 5:18 PM No comments:

"Yellow Fire", is the first single to be taken from shoe-gazing specialists Percolator's forthcoming debut album, and the Waterford trio's first release since 2009's excellent "Flicker" EP.  The track has a Sundays meets Slowdive vibe, with cantankerous guitar chords set against drummer Ellie's sweet half spoken vocals, "Yellow Fire"  indicates that Percolator's album, could be an  Irish debut of considerable quality.
Yellow Fire by Percolator.

"Yellow Fire" is available for free on Bandcamp
Posted by Alternative Irish Music Review at 4:31 PM No comments: 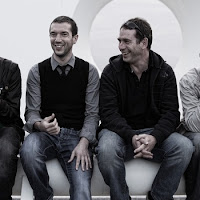 The Difference Engine, is the name of the first computer envisioned by Charles Babbage in 1822. It is also the title of an alternative history novel by modern and contemporary thought genius William Gibson. It is also the moniker of a Dublin blue-pop quartet.
The Difference Engine's third single "Imperfect Lines" is due out at the end of August.  The track is heavily influenced by the likes of Hard -Fi, Arctic Monkeys, and Milburn. With a dash of "Chim chiminey, Chim chiminey, Chim chim cher-oo!" thrown into the mix.
Brian Canavan's Vocals  and Colin Stanley's Trumpets provide the standout moments.
The Difference Engine - Imperfect Lines 2 by RisingStars 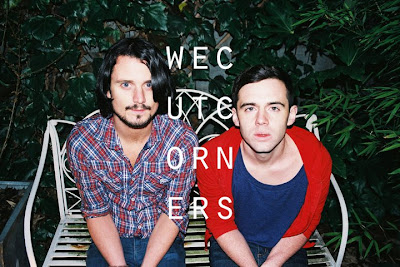 The Delphi label's newest act We Cut Corners have released a video for their track "Go Easy" from their forthcoming debut album  'Today I Realised I Could Go Home Backwards". The video will now doubt cause controversy due to its "manage et toi" storyline. The video is beautifully shot in black and white. But does it enhance the song? We'll let you judge for yourself.

Posted by Alternative Irish Music Review at 5:14 PM No comments:

We ran along to Crawdaddy to see I Phoenix, and the NME approved Zombie Cops, in what was potentially a night of big riffs and moshing. Bizarrely a genius mash up of Adele and  Aloe Blacc, proved to be the highlight.

The Northern Irish music scene has been spewing out classy acts of all shapes and genre splitting sizes for some time now. So much so that the very prospect of seeing an unknown band from up-north is tantalising these days. However we were thoroughly disappointed with the bland discharge of Belfast quartet Levity Breaks. Despite Marty McLoughlin's, Vedder style vocals we could not stomach The Fray B-Side style of the songs. With the piano parts in particular unbearably cheesy.

It's been a while since we've seen Zombie Cops, live and they have obviously been hard at work on their sound. They have morphed into a much darker outfit. They seem to have worked hard on their vocal harmonies and the guitar sound in particular has become richer and thicker. However, the influence of Placebo, Incubus and QOTSA is still evident .

Singles "Win Some Loose Some" and "You Do" are the highlights of their compositions. While newer material indicates that, future releases are to be welcomed. One of the things that sets Zombie Cops apart from their contemporaries, is their ingenious choice of covers. Including Human League's "Don't You Want Me Baby". Tonight's cover is the highlight of the evening. A mash-up of Adele's "Rolling in the Deep" and Aloe Blacc's "I Need A Dollar".

I Phoenix took to the stage and delivered a high octane performance of modern alt-rock. Sonic Youth are an obvious influence especially noticeable in Conor Wilkins vocal delivery. While the guitar riffs are reminiscent Of QOTSA and Biffy Clyro and The Cure's darker moments. At times however, it was a struggle to hear Wilkins, vocals over the band. When he delivered the songs in a Thurston Moore style. This may not be a reflection on Wilkins, ability to project his voice though. As Crawdaddy is notorious for its bad sound quality.

Formed in 2008 Kildare quartet I Phoenix, have recently added new guitarist Ste Devine, to their ranks. And it's easy to see why they needed needed one. The riffs are quickfire and complicated with touches of math-rock and prog evident. Devine, has also become the visual focal point of the band, as he jumps around like a man possessed, living every note. And his high energy performance is matched by his proficiency as a guitarist.

Highlights of their set included "Fade and Erase", "Tremors" and "Night Sparks", which you can see the video for below. If you like it, I would highly recommend you check out I Phoenix live.

Posted by Alternative Irish Music Review at 3:51 PM No comments: