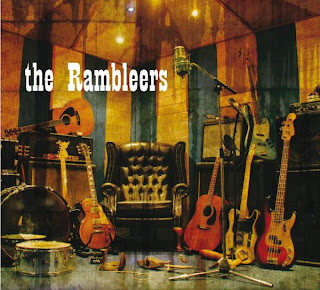 The Rambleers debut album "Roots" is foremost an album for lovers of classic blues-rock guitar licks. The influence of Rory Gallagher, Led Zeppelin and  Lynyrd Skynyrd is palpable. By attempting to travel this well-worn road The Rambleers, have set themselves a virtuoso level of musicianship to aspire to and in the end, to be judged against.
The guitar, drums and bass in particular are lovingly delivered with some skill on songs like "Roots"and "Ebb and Flow" in particular. The vocals bizarrely have a touch of Madchester about them in places with a deep rooted swagger, whilst also touching the more obvious blues rock keystones. Slide guitar led, folk jamboree  "New Years Day" is one of the albums softer highlights. While "Dirty Blue" pays homage to the call and response origins of the blues itself.
It would appear that The Rambleers have done the unthinkable and created a credible Irish blues record.
You can catch The Rambleers live every Sunday in The Mezz or check out  http://breakingtunes.com/therambleers for live dates and further details.
Posted by Alternative Irish Music Review at 7:44 PM No comments:

Richter Collective recently continued their impressive winning streak with the release of Squarehead's latest single "Midnight Enchilada" Its release party at Dublin's newly revamped Mercantile was one of the gigs of the year to date.
Check out the new video for the single below. But beware, the chorus may cause you to throw your plans for the evening out the window. Being the hummable summer wonder that it is.
We expect big things from Squarehead in the future. Definitely a band to watch out for in 2011 and beyond.

Windings are back with a fantastic new single Embrury Greenway check out the video below its top stuff.

Posted by Alternative Irish Music Review at 6:53 PM No comments:

Review : We Are Trees "Girlfriend" EP

Bedroom-ephemeral specialists We Are Trees return with their second EP "Girlfriend" the companion piece to "Boyfriend" their critically acclaimed debut release.
The band believe that when combined, the two EP's create one whole album, a side A and Side B if you will. Having completely swooned over their first release, we were thoroughly excited at the arrival of the next instalment.  And as the cover suggests it is a more sexual platter.

"Teenage Heartbreak" eases us into the EP with the familiar base elements of reverb laden vocals, acoustic guitars and the bombastic complicated-minimalism of Josiah Schlater's drumming. Lyrics of loss are never far away with We Are Trees "you never wanted to be with me ...I cried"  The backing vocals step forward and  the "oohs" invite us to hum along and drift away through the wordless choruses.

"Colorado" centres in a dark acoustic riff landscape with occasional synth stabs The vocals mimic the guitar melody and the guitar melody mimics the vocal melody as the song builds, into a layered atmospheric guitar solo. Once again James Nee conveys his emotions equally well in "oohs" and "ahs" as he does in words.
"Talk to me girl I never wanted to end this way with you" urges James Nee in his most Beatle like lyric to date on "Girlfriend" An excellent song which showcases James Nee's love of The Smiths and Belle and Sebastian.  The shortest song on the EP "You" is a beautiful finger picked ballad wrapped in a bow of sadness.

"I Don't Believe in Love" is the stand out track on the EP it proves that We Are Trees can rock just as well as they can create ephemeral pop. Distorted vocals lead this Weezeresque stomp, out of the traps.  The half familiar lead lines build into a dark discorded middle 8 section Think "Everlong" for this generation.

If as James Nee claims his songs are "all about imaginary girlfriends" god help us when his heart really gets broke, because the music he writes will be unbelievably good. "Girlfriend" is an excellent EP which shows We Are Trees have the potential to be a global phenomenon.

Posted by Alternative Irish Music Review at 6:59 PM No comments:

Review: Hamell On Trial, live at The Sugar Club, Dublin.

Blessed with the spirit of Hunter S. Thompson, and the adamantium tongue of Bill Hicks, Hamell On Trial, delivered a relentless evening of thought provoking no-limits comedy content in The Sugar Club.
He took to the stage dressed like a ghetto Johnny Cash, in a black suit with added shades and beanie hat, armed with an ageing guitar, born in 1937 to be precise.
Hamell On Trial, creates a wall-shaking sound of an earthquake or an approaching avalanche. Part Pixies, part metal, part dropped D blues death-machine.
A lightning quick wrist is twinned with a lightning quick mind to create some truly jaw-dropping comedy gold. No subject is taboo from Michelle Obama's anal cavity to George W. Bush ejaculating on The Bible.
While more personal experience based comedy about post-divorce dating and meeting John Lennon as a teenager, brought tears to my eyes.
Hamell On Trial is a spectacular political satirist and a must see for loveres of "harsh-truth" comedy.
Posted by Alternative Irish Music Review at 6:01 PM No comments:

"Yeah OK" was one of 2010's best albums, full of primal disco loveliness. It saw the Not Squares arrive in considerable style. The band are currently causing tremors in the UK, having recently wowed Camden's prestigious KOKO. We caught up with Drummer/vocalist Keith Winter for a long overdue Q and A.. 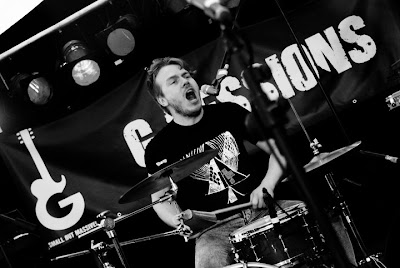 AIMR: What attracted you to the drums in the first place?
KW: I grew up in a charismatic Christian church where drums were played every Sunday in what was an old rollerdisco hall and everytime they were hit I would start laughing with excitement.
AIMR: How old where you when you first picked up the sticks?
KW: I was about 13 I think.
AIMR: Did it come naturally to you?
KW: Naturally enough yeah – drums are easy to get to a competent level on, to hold a beat.
AIMR: Who were your original influences?
KW: My original influences were Mitch Mitchell, Jimmy Chamberlain, Steven Adler, John Bonham.
AIMR: What was the first album/song you bought was it purely for the drumming?
KW: First album I ever bought was ‘The Ultimate Experience’ by Jimi Hendrix, the drumming was a major feature of the record for me.
AIMR: What was the first gig you attended?
KW: I think Ash in the Ulster Hall
AIMR: What was the name of your first band and were you any good?
KW: First band I was in was called Dimension 7, it was ok but just about ok.
AIMR: When and where did you play your first gig?
KW: First gig I can really remember was a battle of the bands in a church hall in Bangor in 1996.
AIMR: How many bands have you been in before Not Squares

KW: Ooof probably been in about 10 bands over the last 16 years. 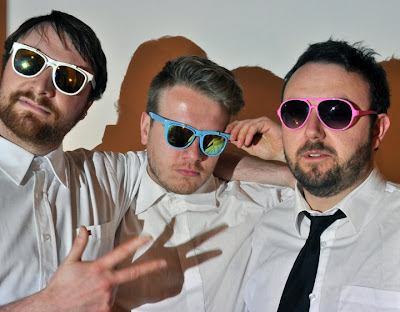 AIMR: Are you a drum whore then?
KW: I’d like to be a drum whore.
AIMR: What did you learn from each of the experiences?
KW: Less is more.
AIMR: Do you drum in your sleep or have drumming dreams?
KW: Don’t know. Doubt it.
AIMR: What is your favourite drum beat and why?
KW: Straight 4/4 dance beat.
AIMR: Who is your favourite drummer and why?
KW: Favourite drummer is John McEntire from Tortoise etc. He is the ultimate in drumming etiquette, and live he has the stare of a maniac.
AIMR: Do you play and other instruments?
KW: I play (untrained) keyboards, type out drum patterns and midi basslines and sing into my macbook
AIMR: Are you a frustrated songwriter?
KW: No I try to get anything that lingers in my brain out into some form of recording. I use a voice recorder sometimes while I’m on the move to beatbox into so I don’t forget a beat or a bassline or vocal melody. 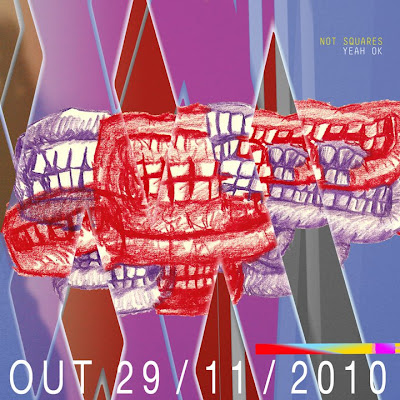 AIMR: Why is drumming dismissed by the mass media when it is one of most important components in popular music?
KW: I haven’t experienced its dismissal, if anything it seems youtube and other mass media sites are promoting drumming and its presence in pop music more than ever.
AIMR: Have you done much session work and are you available for session work?
KW: I have been asked to drum for other acts of whom I don’t know the people involved, both live and in the studio but didn’t take them up on it. I would definitely consider session work.
AIMR: Who would you like to work with then?
KW: I’d like to work with talented producers, working with David Holmes for a Not Squares remix was fun… there’s a chance he might ask me to play on future records of his. I like it when there’s a blank canvas and someone says ‘just drum’ to something they have written. That’s probably the most exciting part.
AIMR: What advice would you give any budding drummers?
KW: Separate your right hand from your right foot and then you’ll advance tenfold.
AIMR: What piece of kit can you not live without?
KW: Custom welded cowbell.
AIMR: Whats happening next for your band?
KW: We are playing a heap of festivals around the UK and Eire, plus we are in the process of getting album number 2 ready to be made.
Posted by Alternative Irish Music Review at 5:24 PM No comments: