Here is the new video for Taking Lives from the excellent Zombie Cops by Highly Stimulating Productions and its our video of the week. 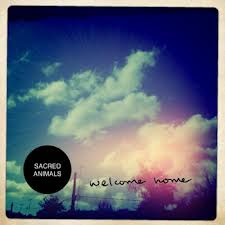 It's been quite a week for Sacred Animals following the release of their debut EP 'Welcome Home' on the Delphi Label. They are currently listed as fourth most blogged about act in the blogosphere in the London Independent. Kanye West is number one. No mean feat for a new band on a fledgling Irish Indie label. We caught them Upstairs at Whelan's following a hectic week of Capital gigs including The Ruby Sessions.

The intimate surroundings perfectly suited tonight's paired down two man incarnation of Sacred Animals. And for tonight's show they chose to do things Stop Making Sense style, as the solitary figure of main man Darragh Nolan takes to the stage for As You Sleep. Nolan delivers the first of many haunting vocals on this dark mournful electric ballad.

Darragh Nolan's voice is a record producers wet dream: rich, powerful, pitch-perfect and effortless. Add to this the backing of the other Sacred Animals and we have a first class harmony machine, that would surely bring tears to Brian Wilson's eyes.

For the rest of the set Colbert takes his place on drums, sans cymbals, standing upright in the finest indie tradition of The Jesus and Marychain. The bands black and white projections of clouds, lakes and caravan parks cast a large dancing silhouette of Colbert, ensuring he is the visual focal point from now on. Indeed, Nolan seems happy to linger in the shadows and allow his face and songs to convey his emotions.

Backing tracks of synths, white noise and bells join the bombastic live drumming on Still Removed where the eerie spectre of Nolan asks "Whats the point in boxing clever? All I see is all you are. It's the flaws that make the man & you are an imperfect star." Three songs in and the audience is enthralled huddled around the stage hanging on every syllable.

Wired Islands begins with an Eels style keyboard line before Nolan delivers a haunting vocal Thom Yorke would surly approve of "A rest will come, islands less inhabitants, with one eye on the prize, executed plans, pursued by passengers."

Mark Colbert's drums drive us through another, other-worldly sound scape reminiscent of 'Virgin Suicides' era Air on Chosen Seed. "Are you scared of what you said Well you're not the only one." Is a truly dread filled refrain delivered from the shadows by Nolan.

They finish off the set with the title track from their debut EP 'Welcome Home'. A throbbing percussive masterclass of energetic paranoia, aided by long hanging piano chords and a looped "ding dong" bell melody. Welcome Home conjures the claustrophobia of the finest moments of Massive Attack.

Sacred Animals are set for a great future Darragh Nolan has a truly phenomenal voice. Creatively they are already surpassing the output of many of their influences. Mark my words it wont be long before the world worships Sacred Animals.
Posted by Alternative Irish Music Review at 2:51 PM No comments: