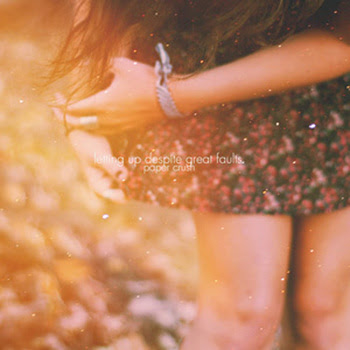 Paper Crush EP is the third release by La shoe-gazer revivalists Letting Up Despite Great Faults. As you would expect there is an early 90's UK sound on display with obvious nods to the likes of Ride, Slowdive, and Ned's Atomic Dustbin and New Order; though these influences have probably for the most part been recycled through US based bands such as Postal Service, Washed Up and The Radio Dept.  There is also an under current of electronica, perhaps even "8-Bit" running through this collection of songs

"Repeating Hearts" starts things off in an ephemeral haze of vibrant electro stabs and a wistful world weary vocal. Thus setting the tone for the entire EP.  "Sophia In Gold" is the early standout track on the EP Michael Lee's vocal is beautifully delivered, set against two memorable interchanging keyboard hooks which combine beautifully with the fuzzy keybass beneath.  "Teenage Tide" has an ephemeral JMC kick to it with single note lead guitar lines hovering over a chugging bassline. Lee's vocal delivery is of reminiscent of Wannadies singer Pär Wiksten's unmistakable timbre.  "I Feel You Happen" is reminiscent of Ride's classic album openers. A whirlwind of swirling layered guitars, smacked against a melodic bassline, fighting to be heard against a wall of feedback and distorted drum loops. In other words its great.  Things go all post-rock dance-floor on instrumental track "Aurora" a wonderfully catchy melodic track which will have you humming along in no time.  "Helium" closes the EP in some style. This track has a more electro feel, with arcade bleeps weaving between the catchy guitar licks and programmed drums.

Paper Crush EP is a wonderful collection of songs it's no wonder the likes of Ben Gibbard (Death Cab For Cutie) extol about Letting Up Despite Great Faults, on such a regular basis. They should be huge.

Posted by Alternative Irish Music Review at 6:19 PM No comments: